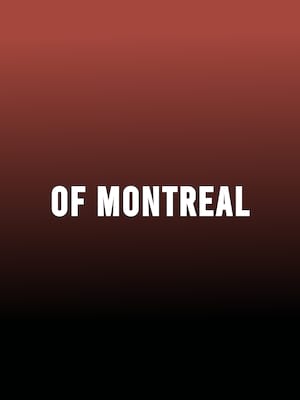 for music fans who can enjoy either a packed basement or a crowded stadium, this tour is a riot.

Why See Of Montreal?

Of Montreal tour in support of "UR FUN"

American indie-pop group Of Montreal head out on an enormous tour of the United States and Canada from February-April 2020, in support of their brand new album UR FUN. The Athens, Georgia based band kick off with a hometown show on February 27th, before a huge trek across the country winding up at the Wow Hall in Eugene, Oregon on 2nd April.

UR FUN was released on January 17th and is the latest in the group's formidable output of 16 studio albums across a 24-year career. The record provides fans with a brand new dose of the blissful, fun-filled indie stylings that have defined Of Montreal, fronted by multi-instrumentalist Kevin Barnes. Expect more of the colourful, danceable performances which have gained Barnes and his cohorts a dedicated fanbase over two-and-a-half decades.

Seen Of Montreal? Loved it? Hated it?

Sound good to you? Share this page on social media and let your friends know about Of Montreal at The Broadberry.