Sorry! You missed Big Head Todd and the Monsters at The National 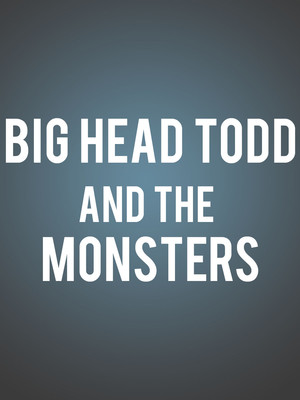 Big Head Todd and the Monsters

Big Head Todd and the Monsters hit the road!

Why See Big Head Todd and the Monsters?

out on the open road

Formed in 1986 Big Head Todd and The Monsters (or BHTM) hail from the mountainous state of Colorado. Although they're now on a worldwide platform, BHTM music still encapsulates the heart of the rocky mountains, with their fast-paced rock leaving fans dancing all night long! Don't miss your chance to see them live when they hit the road in their new tour!

Big Head Todd and The Monsters' third album, 1993's "Sister Sweetly" went platinum and shot the quartet into stardom. With a plethora of hits in their boots, expect to hear tunes like "Broken Hearted Savior", "Boom Boom" and "Resignation Superman" when they land in your town!

Love this band!!!. A great taste of Colorado in Cleveland. The venue however... more

Almost surprising how much zest and power behind the guitar work and vocals... more

Sound good to you? Share this page on social media and let your friends know about Big Head Todd and the Monsters at The National.