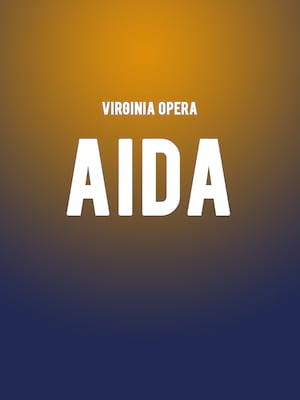 A rich, sumptuous opera revered by all as one of Verdi's greatest works

Featuring the Richmond Symphony Orchestra and the Richmond Ballet alongside sweeping set designs and fabulous cast, the Virginia Opera stage the Verdi's masterpiece. Often hailed as the pinnacle of the composer's artistic and technical expertise, it brims with orchestral color, stunning exotic melodies and a theatrical atmosphere to a story about the clash of church and state, oppression of a people, patriotism, duty and the relationship between a father and his daughter.

Set in Ancient Egypt, the story centres around the conflict between forbidden love and hatred for one's enemies. Aida, a seemingly lowly Ethiopian slave girl is in love with her Egyptian captor Radames, a distinguished warrior on the battlefield. Unbeknownst to everyone however, she is in fact the captured princess from Ethiopia, whose furious father is on his way to rescue her, laying waste to Egypt in his path. Adding to the sense of danger is Amneris, the Egyptian princess, whose intense love for Radames cannot shake the feeling that the mysterious Aida just maybe her rival in love.

Sung in Italian with English supertitles

Photo by Hassan OUAJBIR on Unsplash

Sound good to you? Share this page on social media and let your friends know about Virginia Opera - Aida at Carpenter Theater.